Discover Cairo, the city that never sleeps with Spring Tours Egypt. There, you will find the top things to do and the most important attractions in Cairo such as the Egyptian Museum, where you will find the greatest collection of Ancient Egypt antiquities, and Egypt’s Pyramids, which are famous for reflecting the grandeur of the Egyptian civilization. Cairo, also known as the City of Thousand Minarets, is rich with monuments depicting the majesty of the Islamic civilization such as the Citadel of Salah El Din and Sultan Hassan Mosque. 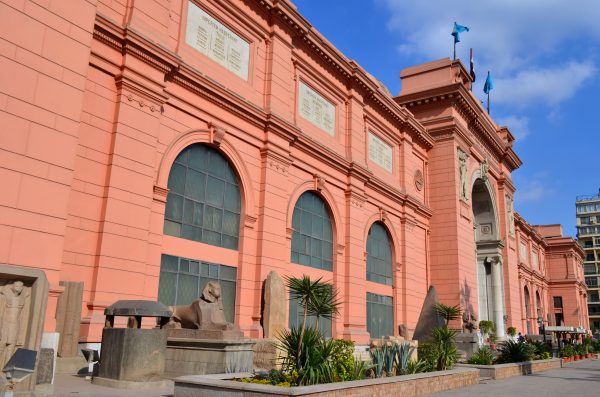 The Museum was built in 1902 under Abbas Hilmi II. With more than 120,000 objects, the museum houses an incredible collection of exhibits depicting the glorious reign of ancient Egypt. Displays on the ground floor are of large objects arranged more or less chronologically. Treasures from the tomb of Tut Ankh Amun are displayed on the upper floor. The child-king mortuary mask -discovered in his tomb- is made of solid gold and has been described as one of the most beautiful objects ever made. Also not be missed: the ivory statuette of Khufu from Abydos, the bust of Queen Tiyi, the gilded statuette of Ptah, and the blue faience hippopotami of which reproductions have been made that are sold in boutiques all over the world. 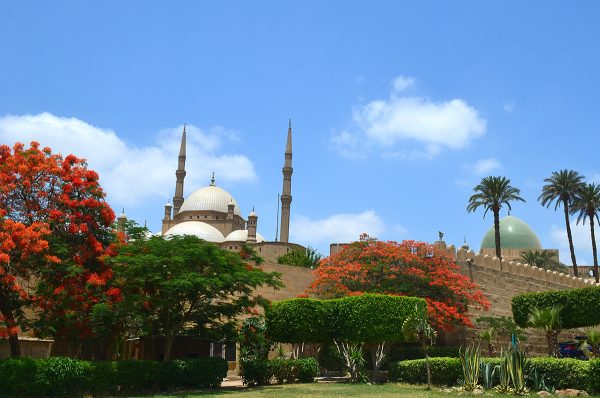 The Citadel of Of Salah El Din

The Citadel was begun by Salah El in 1176. In 1218, Sultan Al Kamel, took up residence in it and from that time until the construction of Abdeen Palace in the mid 19th century, it was also the home and the seat of government of all Egypt’s subsequent rulers.

Visible from nearly anywhere in the city below on its site at the highest point of the southern enclosure is the Mohamed Ali Mosque. Built between 1830 and 1848, it was not completed until 1857. Below Mohamed Ali Mosque is great 14th century mosque of Al Nasser Mohamed (the father of Sultan Hassan). 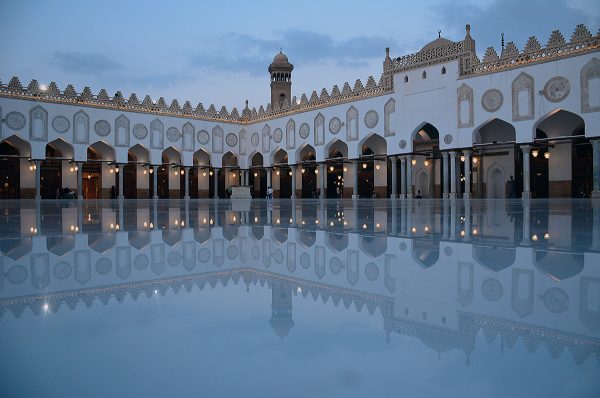 Al Azhar (the most blooming), founded in AD 970, was the first mosque of the Fatimid city of Al Qahera. It was established as a Shi’i teaching mosque. Classes have continued for the past 1000 years, making it one of the oldest universities of the world. The mosque is a harmonious blend of periods and styles. The mosque has five minarets with small balconies and beautifully carved columns. It has six entrances, the main entrance is called the Barbars’ Gate, where the students were once shaved. This gate leads to a small courtyard and then into the Aqbaughawiyya madrasa to the left, which was built AD 1340 and serves as a library. The Taybarsiyya madrasa on the right, was built in AD 1310 and has a very fine mihrab. The Qayetbay entrance was built in AD 1469 and has a minaret on top. 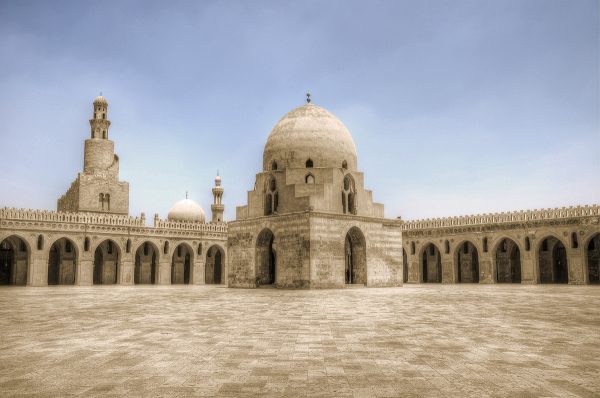 If you have only time to see one mosque in Cairo, it should be this one. Ahmed Ibn Toulon built a new city called “Al Qatai” after its division into separate districts, each housing a different contingent of his multi-racial army. At its center was the great mosque  of Ibn Toulon built between 877 and 879. It is the oldest intact mosque in the city, impressive both for its grand scale and its extreme simplicity, and a rare survivor of the classical period (9th and 10th centuries) of Islamic architecture. The entrance leads to a vast courtyard (92 m square). The pointed arches are of red brickwork and stucco. Below the ceiling of the mosque runs a 2km-long sycamore-wood frieze which is inscribed with Quranic verses.

The strange spiral minaret was probably inspired my the minaret of Samarra in Iraq, where Ibn Toulon grew up. 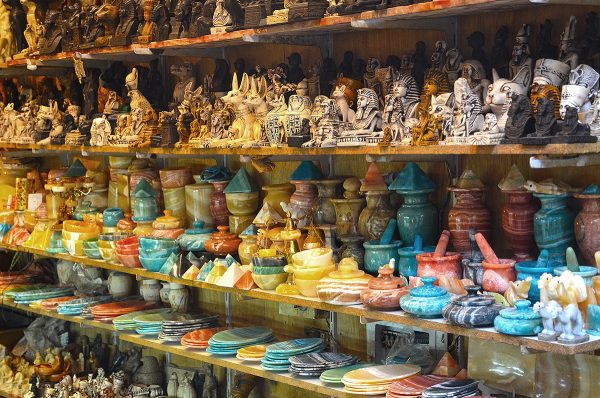 The maze of bazaars is squeezed between Al Hussein Mosque, Al Mouez Street and Al Muski. Amir Jarkas El Khalil, a horse master, built it in 1382 as a caravanserai. Sultan Qunsuah reconstructed most of it in the 16th century, leaving a facade and an original gate. Nowadays, Khan El Khalili is the tourists’ bazaar, and where also locals go to buy spices, perfumes, jewelry, and antiques…

The area is also famous with its coffee shops where you can rest (after shopping) and enjoy a coffee, tea with green mint or hibiscus.

Khan El Khalili area is for many, the most entertaining part of Cairo! A visit to Cairo is incomplete without a stop there… 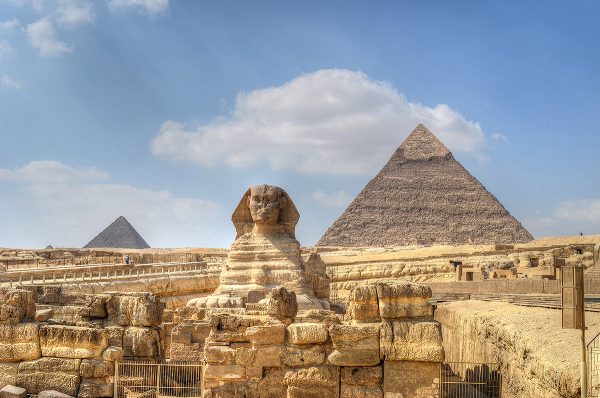 The Great Pyramids of Giza

The monuments of Giza Plateau, built in the 4th dynasty, are the most famous monuments in Egypt. The Pyramids of Giza, the only survivors among the Seven Wonders of the World…

The Pyramid of Khufu (Cheops), is the greatest pyramid ever constructed by the Ancient Egyptians. The Pyramid of  Khafre (khefren), is the second pyramid on Giza Plateau and gives the best picture of a mortuary temple in the Old Kingdom. Near the Sphinx is the Valley Temple where the pharaoh’s body was brought after mummification. The Pyramid of Menkaure is smallest of the trio. It is the last great pyramid of the age.

The Sphinx is called in Arabic “Abou El Hol”, which sums up the mysterious aura surrounding this strange figure with a body of a lion, a human face and a royal beard. 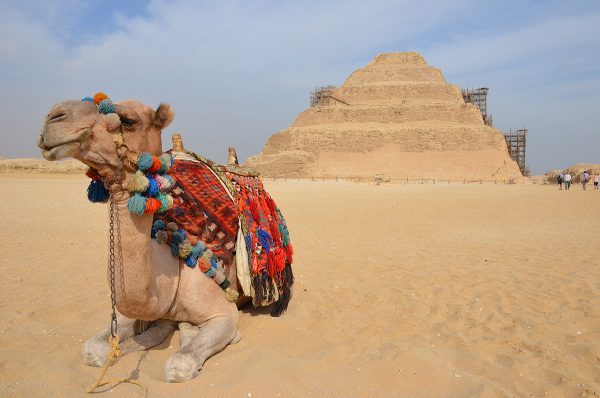 The Funerary Complex of Zoser: built by the architect Imhotep in the third dynasty, it contains the Step Pyramid, which is the first attempt to build a pyramid.

The Pyramid of Unas’ exterior looks like a heap of rubble, but the interior walls are covered with texts, the mortuary literature of the Ancient Egyptians.

The tombs of Ptah-Hotep, Ti and Mereruka contain the finest tombs reliefs of the Old Kingdom. They give an interesting and comprehensive insight into the daily lives of the Ancient Egyptians.

The Serapeum is without doubt the eeriest place in Sakkara. It was discovered by the French archeologist Mariette in 1851. In these cool, dark, underground rock-cut galleries, mummified Apis bulls were buried like royalty because the people of Memphis believed them to be reincarnations of their god Ptah.